Sitting in the Port-au-Prince airport with time to spare before my Miami/Quito flight, I take a look at the website for "Haiti Needs You" (haitineedsyou.com), whose team shared lodgings with me last night at Matthew 25 House.  Students and others blogged during this "alternate spring break" spent walking up and down steep hills for miles each day to put protective tarps on corn stalk huts.  It all happened near the remote mountain town of Seguin, an 8-hour drive from Port-au-Prince.
--Sophie, 17, wrote: "Witnessing two year olds with missing toes and blistered soles
made me wonder how much I 'needed' a pair of Uggs two months ago."
--Ruth (Sophie's mother) blogged that one child said to her "I wish I was white so I
would be happy like you."
--Another young woman wrote of a father with five children who asked her to take
his 2-year old daughter to the US.

In addition to facilitating student service, Haiti Needs You has sent medical/dental teams to Seguin (pop. 40,000) for more than a decade.  The town sits at 6700 feet in Haiti's Southeast Department.  During a January 2013 trip, a car navigating narrow mountain roads tumbled down a mountainside. The Haitian driver, thrown from the car, was badly injured but survived.  All four passengers--American team members--died.  Memorials were erected on the site (guard rails have since been put up) and in the town of Seguin.

New opportunities for the women of the Haitian Batik Project…

As I read about the work of Haiti Needs You in the airport lounge, a petite blond woman greets me with a warm hello and hug.  She is Debbie Couri-D'Amico, and we drove to Gonaives together April 3 to visit a community called Jerusalem, where Haitian families live in 200 homes built by Haven, an Irish-based NGO (havenpartnership.com) founded by an executive of Digicel, the major cell phone provider in Haiti.  Haven, collaborating with the Haitian Ministry of Education, provided sewing classes for the women of Jerusalem.  Debbie wants to help them earn money by sewing items made from batik prints created by the women of the Haitian Batik Project. 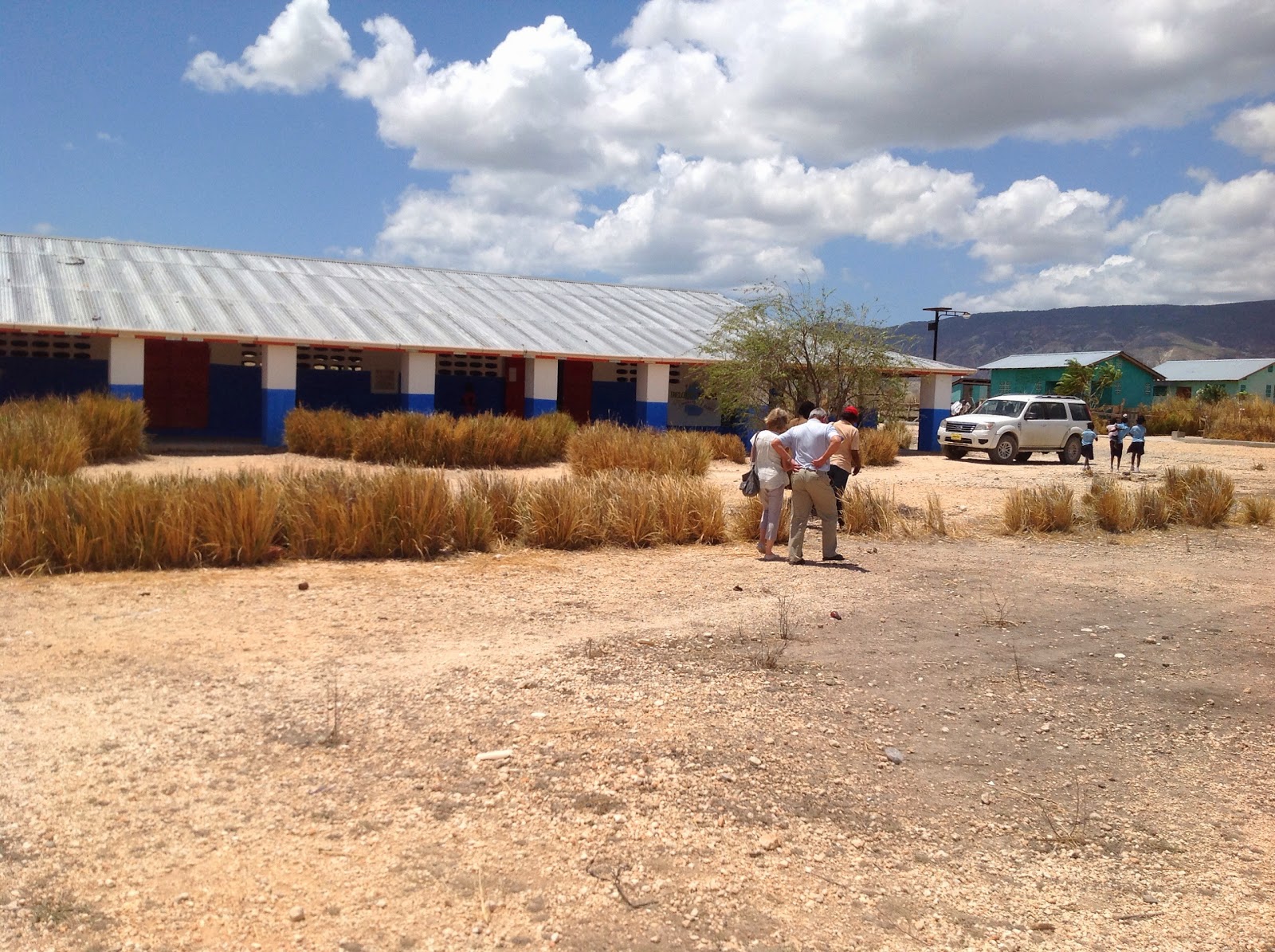 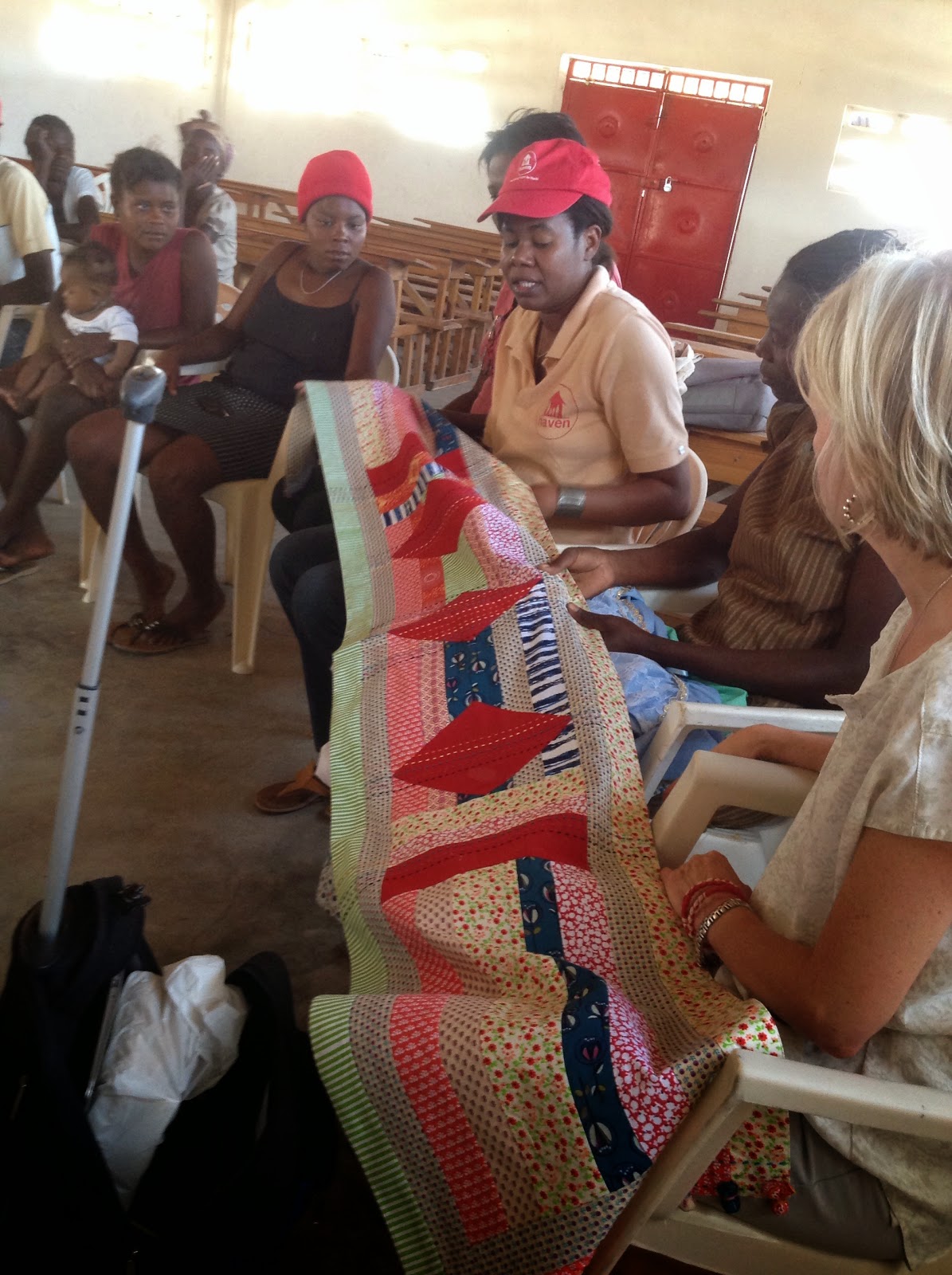 Following the visit to Jerusalem, Debbie observed batiking at the Episcopal compound in Gonaives and suggested ways to streamline the work.  Later, after lively discussion, batik workgroup members agreed to create two-meter lengths of cloth to sell wholesale to Debbie (womenofmilot.com) and to others who facilitate income for Haitians by marketing products in local shops and online (2ndstorygoods.com; apparentproject.org).  We'll need to help the batik workgroup increase their efficiency, and also train women in Jerusalem to make quality products (beginning with pajama pants and table runners), during a visit planned for June 2014.   You can help support this work!  To make a tax-deductible donation, visit the Foundation for International Professional Exchange (fipeworld.org) and designate Haitian Batik Project as the recipient on PayPal.  Email me at jan.engle.lewis@gmail.com with any questions. 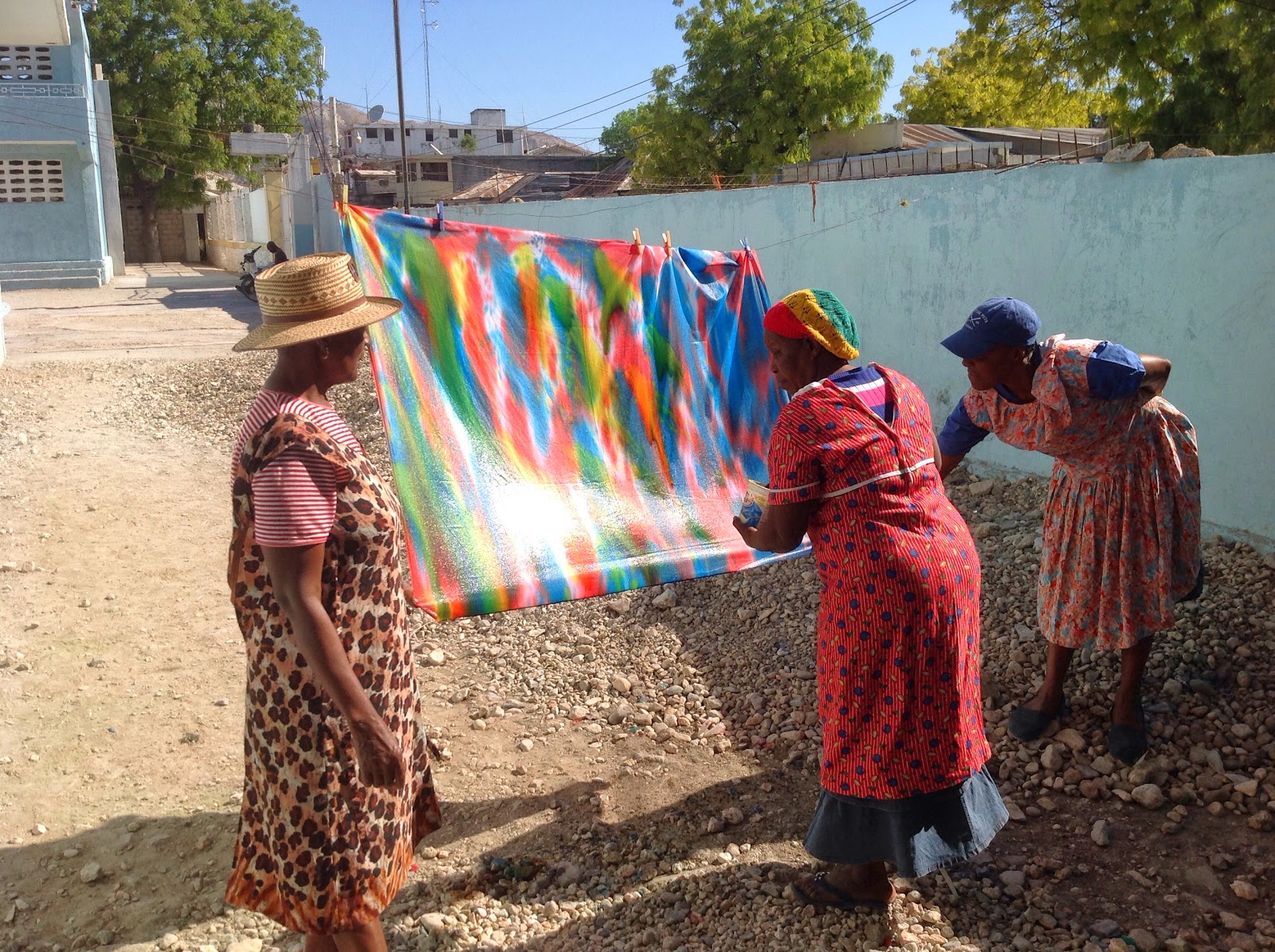 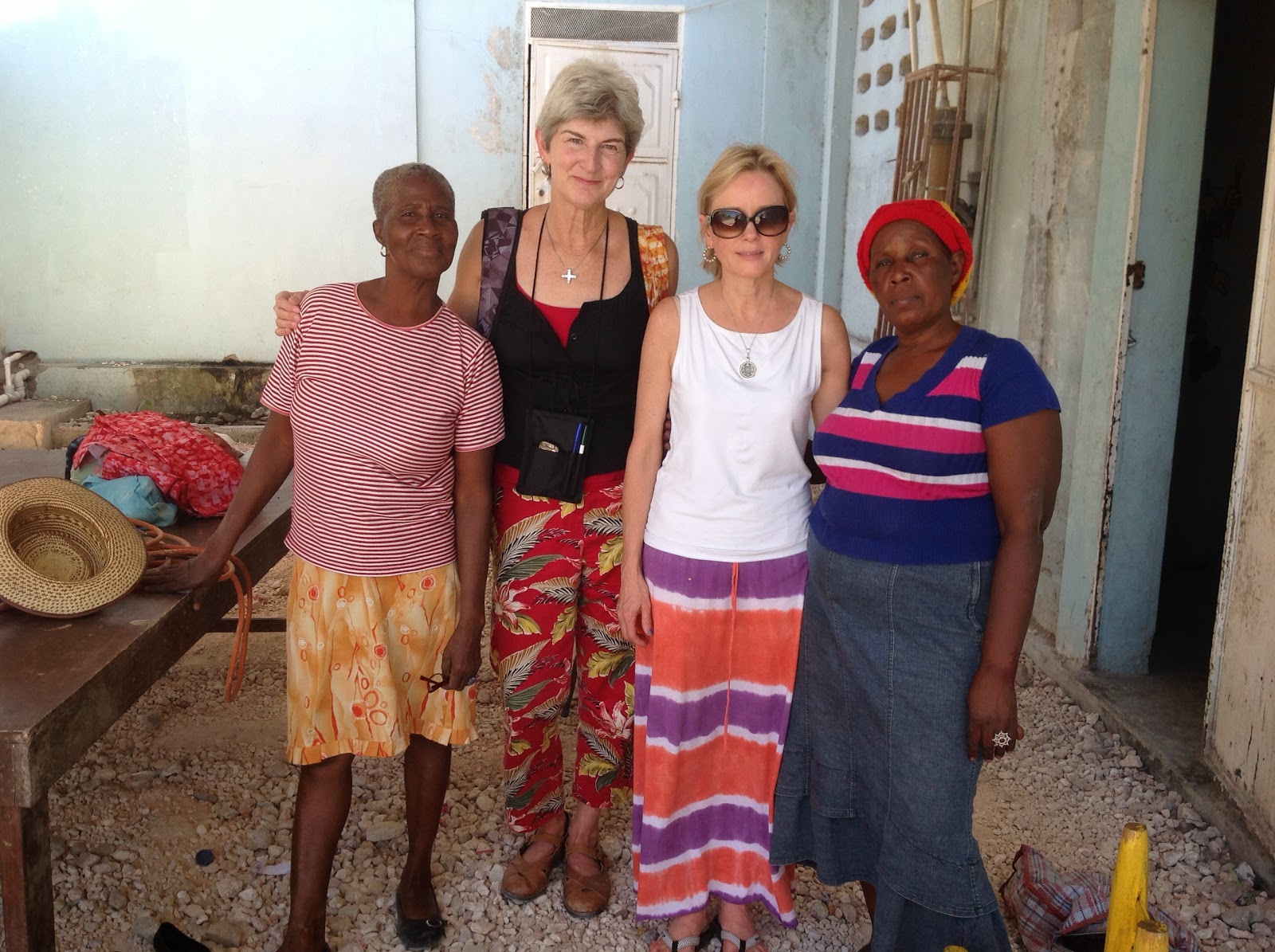 
Debbie (sunglasses) and me with Joselia (L) and
Examene, members of batik workgroup -->


My enduring vision on leaving Haiti is of the little girl who stood barefoot on the rocky white dirt of Jerusalem under the searing midday sun, observing us visitors.  Her hands entwined serenely, she watched us intently for 10 minutes as we talked about the lack of water and shade, and the eagerness of the women to earn an income so they can feed their children and send them to school.  The eyes of this child held wisdom and also inquiry, for I saw in her the face of Christ (Matthew 25: 31-46). 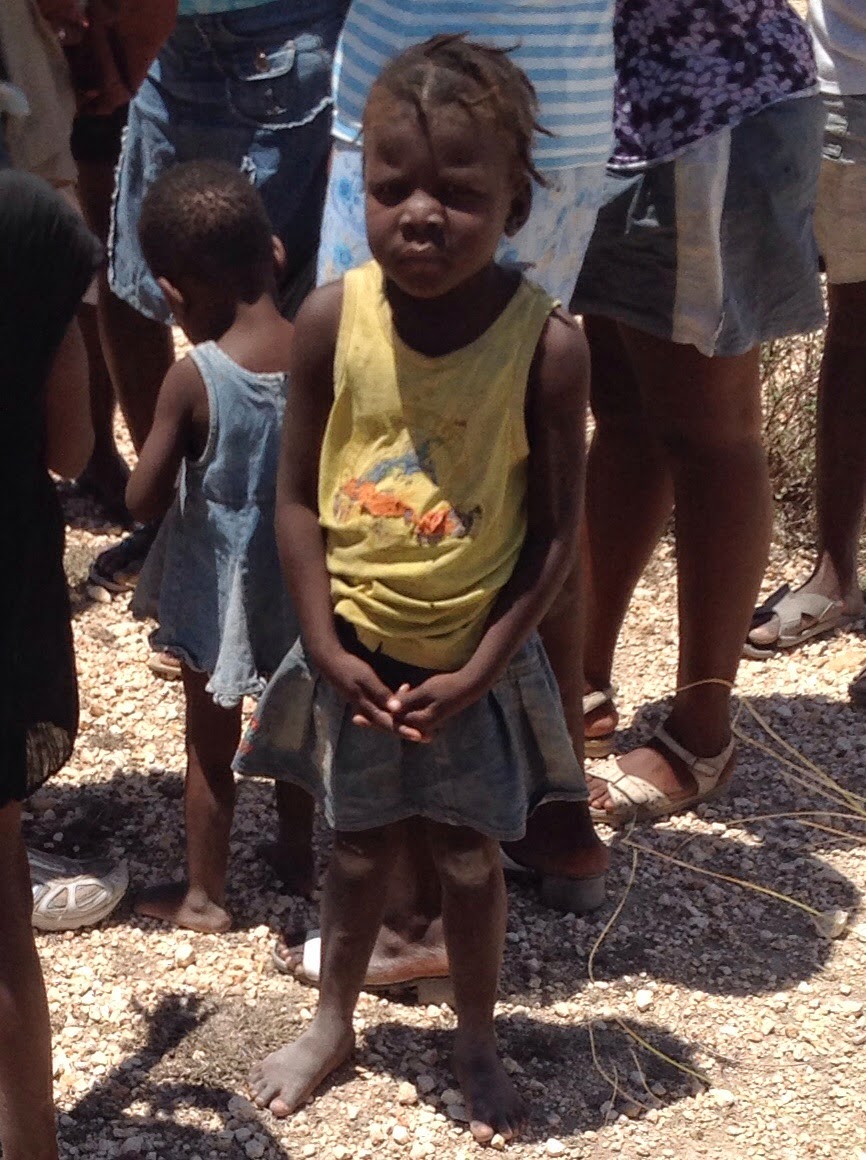 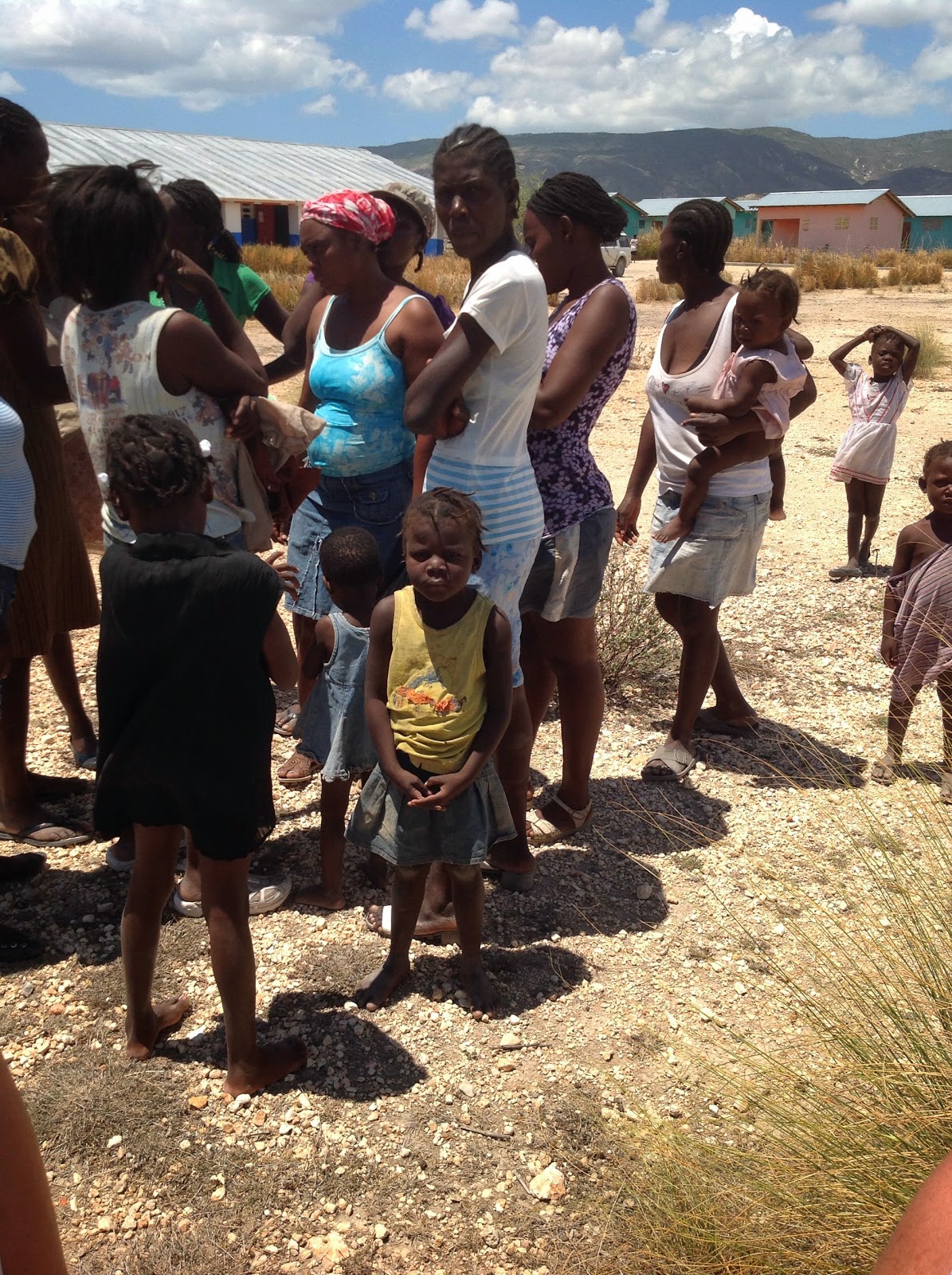 Haitian women have the highest rates of cervical cancer in the world, and most have no access to screening or treatment.  But the women of the Haitian Batik Project want to help change those statistics in their own community.  A portion of their batik earnings will now go to support cervical cancer prevention in Gonaives. 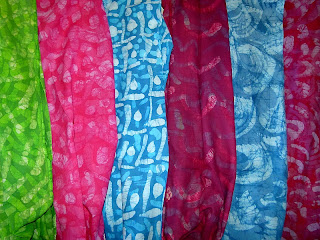 Please purchase and/or help sell these recently received, hand-made batik scarves (100% cotton; 15 x 60") at $24 each, with $4 going to cervical cancer prevention and the rest enabling women living in extreme poverty to buy food and send their children to school.  For details, contact me at jan.engle.lewis@gmail.com.  Thank you!

I'm just back from Haiti, where I was able to deliver more than $600 from US sales of batik scarves to the hard-working women of Gonaives who made them.  This income will enable women living in extreme poverty to pay for school fees for their children, buy needed medicines, and/or purchase food for their families who live in one of the hungriest nations in the world.

The women of St. Basile's Episcopal Parish (sister parish to my own in Colorado) in Gonaives (northern Haiti) have expanded their work group to 10, having trained 3 more of the poorer women among them in the batik process.  During my recent visit, they handed me another 50 scarves, and the quality of their work is improving!  I was able to deliver fabric dyes, and the group will now begin making napkins as well as scarves.  Pictured below are two of the women of the work group (seated), and a friend who models one of many ways to wear/use a scarf! 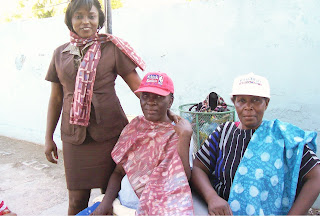 While in Port-au-Prince, I was able to meet with Nadege Beauvil (pictured with me below), President of the board of Femmes en Democratie (Women in Democracy), a Haitian agency that helps women start businesses and market their products.  Nadege found the scarves "beautiful," and I left her with a couple to take to a gathering focused on supporting women and girls in rural Haiti, hosted by the new US Ambassador to Haiti, Pamela White.  Nadege later emailed to say she would like to give one of the scarves to Haiti's First Lady, who comes from Gonaives, and "would understand the support that these ladies need." 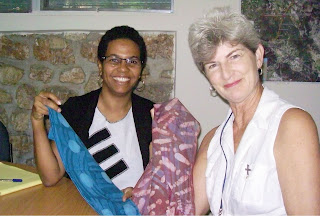 Speaking of support, the women of the Batik Project offer their heartfelt thanks to the many women of the Order of the Daughters of the King (www.doknational.com) who purchased scarves for themselves or to sell to others, and to the generous donors who supported the initiation of the Project, including a grant/donations (ranging $500-$1500) from
Thanks also to the fifteen other individuals who sponsored the Project with $100 donations (and received a batik scarf as thanks)!  We need another 20 sponsors (at $100) to raise funds to take batik artists Beth and Jonathan Evans back to Haiti in the spring to provide additional training for the women.  Please see details on how to become a sponsor in the blog below.

I will return to Haiti in early December to help advance the Batik Project.  If you would like to help support this initiative with funds, ideas, or other assistance, please contact me at jan.engle.lewis@gmail.com.  Thank you!

Following the April batik workshop in Haiti (see pictures with the April blog post), the women of Gonaives produced additional scarves which we have received and will market in the US.  Now on their own after just days of basic instruction, they are making wonderful progress with the art, but follow-up training and support is needed, and you can help!

Please consider becoming one of 35 needed project sponsors by contributing $100 (tax deductible).  We will send you a beautiful, hand-made (under artist supervision) Haitian batik scarf as a thank you!

The scarves are 100% cotton and measure approximately 15 x 60 inches.  They can also be used as belts, turbans, table runners, baskets liners, and curtains!

How to become a sponsor:

Thank you!
Posted by Jan Lewis at 8:26 AM No comments: 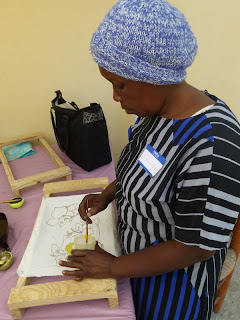 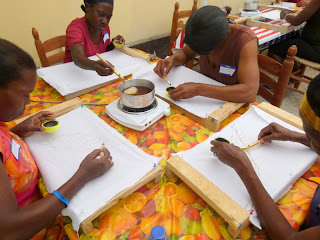 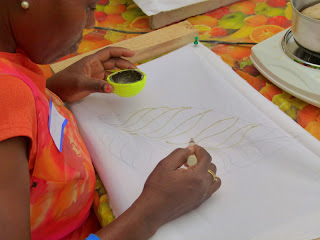 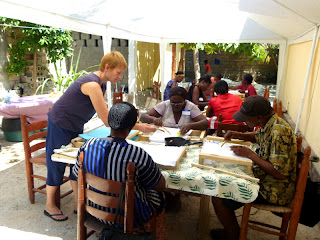 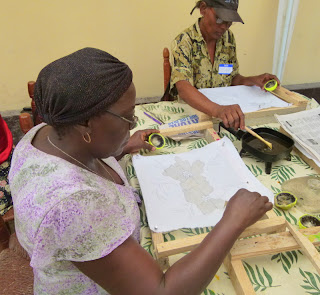 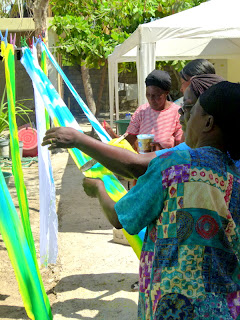 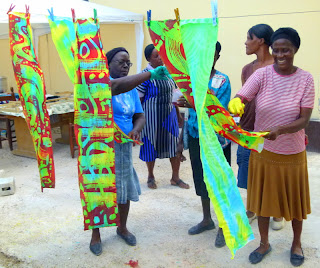 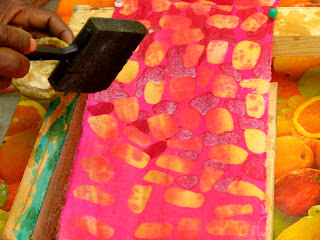 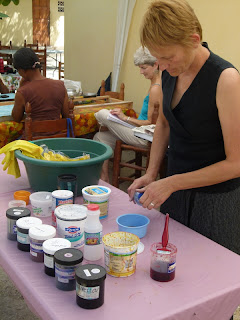 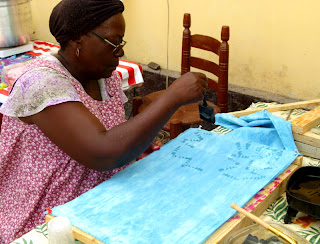 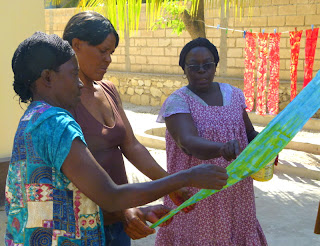 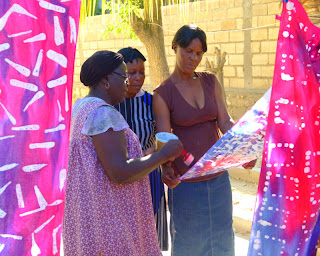 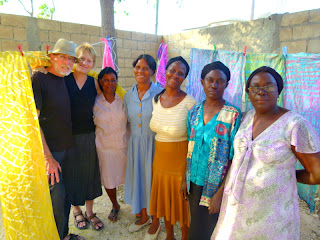 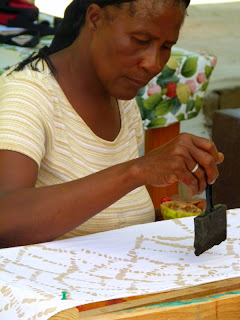 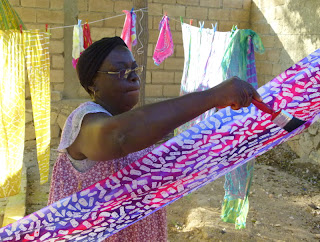 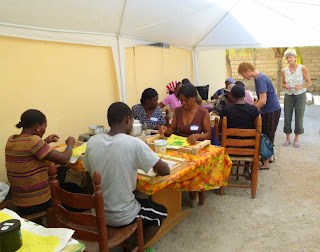 Afternoon breezes (and no rain, so far) have made for a pleasant outdoor classroom at the Episcopal Rectory compound in Gonaives. Twenty-one women (in 3 groups) are learning the batik process from artists Beth and Jonathan Evans.  Jonathan's French skills are a boon! Next week a group of five (of the poorer women--who also happen to be very engaged with the work) will approach Haiti's alternative bank/micro-finance institution Fonkoze about on-going support for the project.  They will be able to continue their work at the Episcopal Church compound for now, but may eventually need their own dedicated space as group size grows.  Upon arrival in Port-au-Prince April 12, we toured the colorful shop of the Comite Artisanal Haitien, where Director Gisele Fleurant offered to sell products.  We'll do some marketing in the US also, and hope to do online sales.
Posted by Jan Lewis at 8:40 AM 1 comment:

"Resource-poor" is the going term for countries like Haiti, yet while most Haitians are materially poor, they are rich in spirit and community...riches forged in large part through suffering.  The women of Gonaives with whom I work lost friends and possessions in 2004 and again in 2008 to devastating hurricanes.  Remarkable in their resilience, they are among those who can "suck strength from the terror of the tempest" (J.H. Howett in Streams in the Desert). Some, understandably, deal with depression and post-traumatic stress disorder.

Self-sustaining initiatives that provide on-going income are crucial to helping women living in extreme poverty.  Supporting such efforts is an investment with almost assured returns, and collaboration in Haiti is definitely worth the effort! Understanding the complex roots of Haiti's poverty is also worthwhile. For a brief overview of Haiti's history and challenges in aiding Haiti, see my article at http://www.chieftain.com/editorial/rebuilding-a-nation-s-people-takes-time/article_bf36f633-f10a-56e8-bd45-e49ae28fa835.html

The Haitian Batik Project (details below) is the latest of numerous collaborative efforts in Gonaives. Other initiatives include the Gonaives Cervical Cancer Prevention Project (www.womensgca.org) and medical work through Health4Haiti (www.Health4Haiti@boxbe.com).  You can become involved by supporting one or more of these initiatives and/or by joining an upcoming service trip. I am happy to share details on these initiatives with any group--large or small.  Contact me at bjlewis@daeo.net.

"The moment one definitely commits oneself, then Providence moves too."  Goethe
Posted by Jan Lewis at 9:30 PM 1 comment:

Batik Project Overview and How to Contribute

The Haitian Batik Project aims to equip resource-poor women of Gonaives, Haiti, with skills and financial resources to create and sell beautiful and useful products (i.e. scarves, tablecloths, napkins, bags) to a wide market and thereby improve the economic status of their families. Recognized batik artists Jonathan and Beth Evans (www.batikartbybeth.com) are donating their time to teach the batik process.  The Project intends to collaborate with Haiti's alternative bank/micro-finance institution Fonkoze (www.fonkoze.org) for ongoing financial support and accountability, and is exploring various avenues for marketing batik artwork.

The Project aims to raise $10,000 as seed money to fund: 1) April 2012 travel to Haiti for Jonathan and Beth Evans and for project coordinator Jan Lewis (many thanks to those who contributed toward the cost of Jan's ticket!), 2) in-country expenses for the two-week training period, 3) purchase of needed batik supplies, and 4) expenses associated with "testing" and initial marketing of the products in the summer of 2012.  Tax-deductible donations can be made by visiting the Foundation for International Professional Exchange website (www.fipeworld.org)  and designating Haitian Batik Project as the recipient on PayPal.  For more information contact Jan Lewis at 719-251-8243 or bjlewis@daeo.net.

Jan Lewis
I first visited Haiti in 1999 as part of an outreach effort of Pueblo, Colorado's Ascension Episcopal Church. Since 2006 I've collaborated with the women of St. Basile's parish in Gonaives (Haiti's third largest city) and others to support spiritual growth (Order of the Daughters of the King), income generation (Haitian Batik Project), and health (initiation of cervical cancer screening and treatment in Gonaives). I lived in Ecuador for over a year (coordinating Daughters of the King) and am now based in Mexico, helping at a shelter for women overcoming abuse, abandonment, and addictions.